Our third day in a row with very mild temperatures.  Highs across the Tri-State were in the low and middle 60's.  A few showers at times crossed the area.  A cold front will push through the Tri-State and will cause a few strong storms, that could have strong winds and even some torrential rain.  Some flash flooding is a possibility. Strong winds overnight switching from the southwest to the northwest and may gust as high as 30 mph.

For your Monday, skies will clear out and be much colder.  The high temperature for Monday will be 44 degrees and northwest winds out of northwest at 10 to 15 mph.  Tuesday will be even colder only a high near 35 degrees and overnight Tuesday and into Wednesday may bring a few flurries.  Winter is just starting to say hello.

Cloudy with occasional showers for the afternoon. High 57F. Winds S at 10 to 15 mph. Chance of rain 40%.
Thursday night

Showers early then scattered thunderstorms developing later in the day. High near 70F. Winds S at 10 to 20 mph. Chance of rain 50%.
Friday night

Thunderstorms in the evening, overcast overnight with occasional rain. Low 51F. Winds SW at 10 to 20 mph. Chance of rain 80%.
Saturday

Cloudy with periods of rain. Snow may mix in. Morning high of 53F with temps falling to near 40. Winds WNW at 10 to 20 mph. Chance of rain 80%. Rainfall around a half an inch.
Saturday night

A few showers in the evening, then clear overnight. Low 29F. Winds light and variable. Chance of rain 30%. 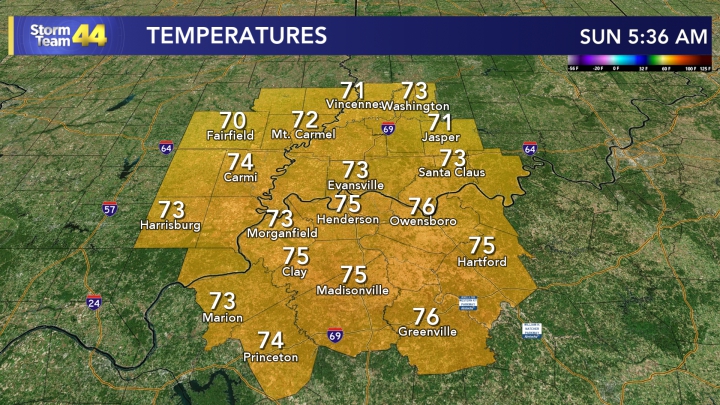